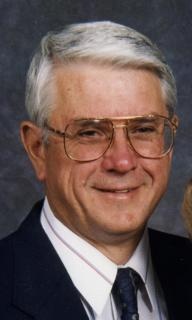 Funeral Services: Friday, August 31, 2012, at 11:00 a.m. at the United Methodist Church in Greenfield with burial at the Greenfield Cemetery. A luncheon will be held following the committal services at the church.

Family Visitation: Will be held on Thursday, August 30th, from 5 to 8 p.m. at the Greenfield United Methodist Church.

Memorials: To the Ron Kniep memorial fund to be established at a later time.

Ron Kniep died peacefully after a long illness at the Creston Hospice, surrounded by his loving family on August 28, 2012. Ron was born in Omaha, Nebraska, to Walter F. and Marian (Thompson) Kniep. He was fortunate to grow up in Bridgewater, Iowa, making many boyhood friendships that lasted throughout his life. After high school Ron attended UNI and resided in Omaha for a short time before moving back to Iowa to begin his banking career. Ron always enjoyed the many pleasures of small-town Iowa life.

Ron loved sports and the out-of-doors. He was a fine baseball and basketball player in high school and once threw a no-hitter in a town team baseball game. He always loved hunting and fishing, even after at the age of thirteen when he was accidentally shot in the foot by a friend while hunting. He carried that bullet the rest of his life. Ron loved golf and remained a fine golfer until the last year of his life.

At the age of twenty-three, Ron began his career at the Union State Bank. At age thirty-seven he succeeded his father, Walter, as the president of the bank, and was for a time the youngest bank president in the state of Iowa. He effectively moved the main office of the bank from Bridgewater to Greenfield, and successfully saw it through tough times in the 1980’s. He retired as president after nearly thirty years.

To order memorial trees or send flowers to the family in memory of Ron Kniep , please visit our flower store.