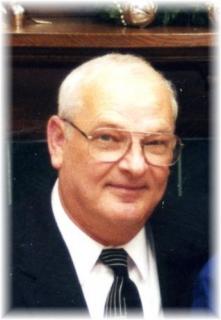 Funeral Services: Will be held on Monday, March 19, 2012, at 10:30 a.m. at the Immanuel Lutheran Church in Greenfield with burial in the Greenfield Cemetery.

Memorials: In lieu of flowers memorials may be made to the Ronald Mueller memorial fund to be established by the family.

Ronald Kenneth Mueller was born in Adair, Iowa on May 7th, 1941 to Kenneth Carl and Marie Martha (Bochart) Mueller. He was baptized at St. John's Lutheran Church, Grant Township in Guthrie County, Iowa. He passed on Thursday, March 15, 2012, at the Greenfield Manor at the age of 70.

Ron grew up on a farm East of Greenfield, attending the nearby rural one-room-school until its closing. He attended Greenfield High School and graduated in 1959. The family attended the Immanuel Lutheran Church in Greenfield where he was confirmed on April 3rd, 1955. His Bible verse was 2 Peter 3:18.

On January 21st, 1962 he was united in marriage to Ginny Hager. This union was blessed with three wonderful sons Michael Warren, Paul Douglas and John Charles.

Ron was a thoughtful hardworking man who did his very best at whatever he attempted. He worked various jobs as a young man, and found his calling as a Real-Estate Appraiser. He was dedicated to doing his best in his vocation and was always eager to complete a task when it was assigned.

In his younger years he enjoyed water skiing. He attempted to master various difficult feats on skis. He loved hunting mushrooms when he was able. He was a member of the Tri-County Pool League and kept the stats for the teams for several years. It was his favorite past time, playing pool. This was his exercise he would say, walking around the pool table. He enjoyed watching his sons and grandsons in their various sports activities

He was preceded in death by his parents, one niece Brenda Mueller, one nephew Stephen Mueller and his brother Daryl.

Ron will be remembered for his thoughtful, caring and forgiving nature. Those left to cherish Ron's memory, his wife of 50 years, Ginny, three sons: Michael and wife Tammy of Greenfield, their three sons Steven, Matthew and wife Hillarie and Andrew all of Jackson, MO, Paul and wife Debbie and their two sons Douglas and Mitchell of Oregon, MO and John of Greenfield, his brother Keith and wife Shirley of Greenfield, sister Sharon and husband Gary Miner of Greenfield, sister-in law Mary Beth Mueller of Fresno, CA, other relatives and many friends.

To order memorial trees or send flowers to the family in memory of Ronald Mueller , please visit our flower store.
Send a Sympathy Card