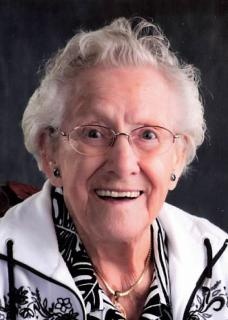 Funeral Services: Will be held on Monday, July 19, 2021, at 10:30 a.m. at the United Methodist Church in Greenfield with burial at the Greenfield Cemetery. Pastor Melinda Stonebraker will officiate the service.

Memorials: may be directed to the Fairview Congregational Christian Church south of Stuart.

Rosa was born in Prussia Township and attended country school. Rosa married George Earl Eddy on October 7, 1944 and to this union three children were born, Linda, Kenneth and Dennis.

Rosa was a midwife/nanny before her marriage to George, and helped deliver and care for the babies after they were born. Rosa and George lived several places in Adair County before settling on the farm south of Stuart, where Rosa worked side by side with George on the farm, driving tractor and caring for livestock. In 1992, they moved to Greenfield.

Rosa was a member of Fairview Congressional Church and Ladies Working Band. She also volunteered at the Adair County Historical Society.

Rosa had a beautiful smile and never complained. She always welcomed family and friends into her home. She enjoyed taking her grandchildren and their friends fishing. She loved square dancing, going for car rides and getting ice cream. She enjoyed embroidering, quilting, and playing cards.

To order memorial trees or send flowers to the family in memory of Rosa Eddy , please visit our flower store.
Send a Sympathy Card