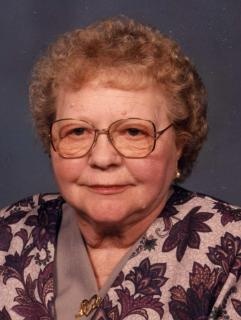 Mass of the Ressurection: Thursday, April 7, 2011, at 10:30 a.m. at the St. Patrick’s Catholic Church in Massena with burial in the Massena Center Cemetery.

Memorials: To the Rose Marie Metzger memorial fund to be established by the family.

Rose Marie Metzger was born November 2, 1926, to George Conrad and Mary Frances (Kordick) Burg in Adair County, Iowa. She passed away on Sunday, April 3, 2011, at the Cass County Memorial Hospital in Atlantic at the age of 84.

Rose Marie married Ray Metzger on January 20, 1951, and three sons were born to this union. They farmed most of their married lives and she worked side by side with Ray on the farm. She always had a big garden on the farm, enjoyed cooking, watching professional wrestling on t.v., and her faith was very important to her. In 2000, she moved to Adair to be closer to her son, Roger.

She was preceded in death by her parents; husband Ray Metzger in 2000; son, Richard Metzger; granddaughter, Sheri Metzger; and two brothers, Leo and Ron Burg.

To order memorial trees or send flowers to the family in memory of RoseMarie Metzger , please visit our flower store.