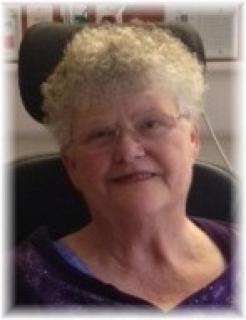 Celebration of Life Services: Will be held on Saturday, March 21, 2015, at 11:00 a.m. at the Greenfield United Methodist Church with a luncheon immediately following. Pastor Eric Schubert will officiate the service. The Steen Funeral Home in Greenfield is in charge of the professional arrangements.

Memorials: Memorials may be directed to the family to be determined at a later date.

Rose Marie Woolsoncroft was born July 11, 1942, the daughter of Helen Marie Woolsoncroft. Surrounded by her family, she passed away on Tuesday, March 17, 2015 at the Good Samaritan Society in Fontanelle, Iowa, at the age of 72.

Rose was born and raised in Missouri Valley, Iowa, where she attended Missouri Valley High School. On October 2, 1959, she was united in marriage to Donald Raymond Sproul in Missouri Valley, Iowa. To this union three children were born: Kelly, James and Kimberly. Don and Rose resided in Council Bluffs, Iowa until 1983. They relocated to Greenfield, Iowa, and started the family business of D&R Foodland which they operated together until 1987. Rose worked at Breadeaux Pisa for a short time before starting a new career with 4 Sons Handy Shops. She worked as a retail manager for 4 Son's and Heartland Pantry for a number of years before working her way up to a District Supervisor. Rose realized her passion was in working directly with the public and once again returned to work as a Retail Manager for Kum & Go until her retirement in 2007. Rose's retirement lasted three months before she returned to work part-time at Kum & Go and later Casey's General Store until her health prohibited her from doing so in August 2014. When Rose wasn't working, she enjoyed spending time with her best friend, Don, her children and grandchildren. She also enjoyed needlework and painting.

To order memorial trees or send flowers to the family in memory of Rose Sproul , please visit our flower store.