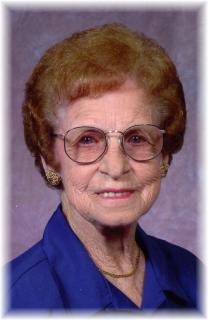 Funeral Services: Will be held on Saturday, December 1, 2012, at 1:30 p.m. at the Immanuel Lutheran Church in Greenfield with burial in the Greenfield Cemetery. Rev. Dr. Keith Schweitzer will officiate the service.

Visitation: The family will greet friends on Friday at the Steen Funeral Home in Greenfield from 6:00 p.m. to 8:00 p.m.

Memorials: Memorials may be made to the Ruby Lager memorial fund to be established by the family.

Ruby Viola Lager was born on July 28, 1917, the daughter of Clarence and Emma Christensen in Adair County, Iowa. She passed away on Wednesday, November 28, 2012, at Shirlee’s Retirement Home in Indianola, Iowa, at the age of 95.

Ruby was baptized and confirmed in the Lutheran Church in Greenfield, Iowa, she was also a member of the ladies aide. She attended country school but had to quit high school and go to work cleaning houses, working from 5:00 in the morning until 9:00 at night every day, she made her own living buying all her clothes and working for $3.00 a week. She also did ironing for people up until the age of 90. She loved to go to garage sales and also loved to have garage sales until she turned 91. She enjoyed going shopping with her three daughters and when her husband was alive they loved to go dancing.

On December 5, 1934, she was united in marriage to Cloyce Nungesser together they farmed in Adair County to this union two girls were born, Shirley and Jolene. In March of 1942, her husband Cloyce Nungesser passed away. Later on she was united in marriage to Elmer Lager and they had one daughter, Diana. Elmer adopted Ruby’s two girls, Shirley and Jolene. She was very active in the ladies aide at the church and helped out at a lot of funeral dinners.

To order memorial trees or send flowers to the family in memory of Ruby Lager , please visit our flower store.
Send a Sympathy Card