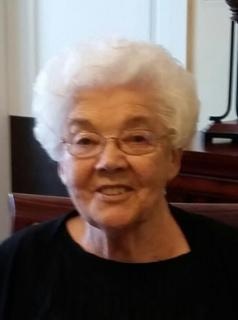 Due to state and federal guidance on gatherings due to the COVID-19 pandemic, social distancing will be practiced and the family and funeral home encourages you to wear a mask.

Memorials: Memorials may be directed to the Ruby Smith memorial fund to be established by the family at a later date.

Ruby Rose (Cron) Smith was born November 9, 1929 in Atlantic, Iowa to Ralph and Rose (Wagner) Cron and passed away in Grimes, Iowa October 7, 2020, peacefully with family by her side at the age of 90.

Ruby grew up on a farm south of Lewis and rode the school bus to Lewis to attend elementary school until the family moved to their new farm southwest of Bridgewater when she was eleven. She graduated from Bridgewater High School in 1947. After graduation, Ruby attended summer school in Corning. She enjoyed her classes very much, especially her meteorology class. She then taught country school in Cass and Adair counties for two years. On May 8, 1949, Ruby was united in marriage to Howard Smith at her parents’ home near Bridgewater. In 1999 they joyously celebrated their 50th anniversary after winning a battle with lung cancer. In 1952 they moved to their farm south of Massena where they resided all their married life. Ruby and Howard enjoyed traveling and always found time each summer to take the kids on a journey. After the family was grown, they toured 48 states. After Howard’s death on May 6, 2003, she remained on the farm until she moved in 2015 to Kennybrook Village in Grimes, Iowa, for health reasons.

While Howard farmed, Ruby kept very busy with a large garden and raising chickens for “egg money” and butchering. She was featured on the cover of Wallaces Farmer magazine with a basket of eggs and young Carol in the picture. She always had a love for flowers and always found room in her garden for their beauty. She loved doing crossword puzzles.

She was preceded in death by her husband Howard, her parents Ralph and Rose Cron, mother-in-law Goldie Davis, and brothers-in-law Leroy Burg, Harold Smith, and Clarence Boling, and sisters-in-law Velma Boling and Virginia Smith.

To order memorial trees or send flowers to the family in memory of Ruby Smith , please visit our flower store.