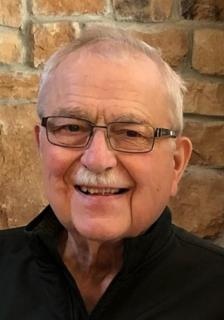 Funeral Services: Will be held on Thursday, October 14, 2021, at the West Des Moines Christian Church in West Des Moines, Iowa, at 10:00 a.m. with burial in the North Fairview Cemetery in Lenox, Iowa, at 3:00 p.m. Full military graveside rites will be conducted by Lenox American Legion Parkinson Post No. 250. Rev. Dr. Randy Ehrhardt will officiate the service. The Steen Funeral Home in Greenfield is in charge of the professional arrangements.

Family Visitation: The family will greet friends on Wednesday, October 13, 2021, at the Steen Funeral Home in Greenfield from 5:00 p.m. to 7:00 p.m. The family requests everyone wearing masks.

Memorials: Memorials may be directed to Russel Goldsmith memorial fund to be established by the family at a later date.

Olin Russel “Russ” Goldsmith Jr. died at the age of 80 in Des Moines Iowa, on October 6, 2021. Russ was born on January 3, 1941 and spent his formative years on family farms south of Corning, Iowa, with his parents Olin and Eleanor Goldsmith; his brothers Bill and Steve; and his sister Margie. Russ spent as much time as he could outdoors including countless hours hunting and fishing. When he was 18, Russ the entrepreneur established an extensive and successful trap line with Bill, ran early in the morning before school. He was also active in 4-H, loved showing cattle, and routinely traveled to several Midwest shows.

Russ went to country schools as a child prior to attending Corning High School. In his Junior year, Russ asked Janet Goldsmith to be his date at Homecoming and the rest as they say, is history. If you could ask Russ what his greatest achievement was, he would probably say it was marrying Janet in 1963 and building a family with her. Russ was exceedingly proud of his three children: Rodney, Scott, and Kristen and had a special relationship with his nephew Darren. He relished being a father and grandfather, spending time with his children, and nine grandchildren.

Russ loved to learn new things and readily transitioned between several careers in his life. After high school, Russ enlisted in the Army National Guard serving five years and was honorably discharged in 1964. Russ began work at Nodaway Valley Foods in 1960 as a warehouseman and rose to Plant Engineer in 1970. When the plant closed in 1972, Russ made his first career change as he and Janet started farming with her parents, Pete and Mary Schafroth. The farm was a special place for Russ. He especially enjoyed sharing his love of animals with his kids as they raised and showed cattle in 4-H. Russ usually had one or two exotic pets around the farm including chickens, several ferrets, baby raccoons, and even a pair of wild turkeys. Russ changed careers again becoming a crop adjuster for IGF Insurance in 1996. After IGF, Russ and some of his friends and colleagues founded Agronomic Solutions, an agricultural consulting firm. In 2005, Russ returned to crop insurance when he started work at John Deere Corp Insurance (JDCI) as a Claims Analyst and later as a Claims Manager until his retirement in 2011. He was very proud to have worked for John Deere and to have processed the first JDIC claims form.

Russ’s love for the outdoors continued throughout his life and he pursued many interests. In the early 70s, he studied and got his pilot license, flying small planes for several years. He was an avid angler and spent as much time as he could in his boat with friends and family. He was a member of the local Bass Club and competed in fishing tournaments in Iowa and surrounding states. Russ loved travel and fishing in new lakes with friends. He especially loved his annual trip to Canada which he made over 40 times throughout the years with close friends, sons and grandsons, and his nephew Darren. He also enjoyed trapping, trapshooting, and hunting of all kinds. Russ also loved to watch racing and spent several years at the Kansas Speedway on race weekends. Russ passed many things on to his children and his love of the outdoors endures in all of them.

Russ’s life has been rich and full of experience, but his greatest joy was his family and especially Janet who remained the love of his life to the day he died. He is known for his sense of humor, his intelligence, and his ability to fix almost anything, but will be remembered most for his limitless generosity, loyalty, and quiet dignity. Russ’s life can be best demonstrated by the countless friends he has made and lives he has touched in his 80 years.

To order memorial trees or send flowers to the family in memory of Russel Goldsmith , please visit our flower store.