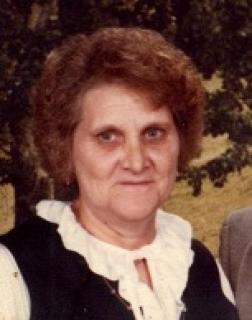 Graveside Services: Will be held on Wednesday, September 21, 2016, at 4:00 p.m. at the St. Patrick’s Catholic Cemetery in Massena. Father Ken Gross will officiate the service.

Family Visitation: The family will greet friends on Wednesday evening, September 21, 2016, from 5:00 to 7:00 p.m. at the Steen Funeral Home in Massena.

Memorials: To the Ruth Burg memorial fund to be established by the family at a later date.

Ruth Maxine Hein Burg was born October 12, 1926, to Walter Hein and Elizabeth (Funke) Hein in Greenfield, Iowa. When Ruth was born weighing 2-3 pounds, her sister Sylvia thought she was a doll so grandma kept her in a shoe box on a shelf so her sister couldn’t play with her. She wasn’t expected to survive but lived to be 89 years and 11 months old. She passed away on Thursday, September 15, 2016, at the CHI Mercy Hospital in Council Bluffs, Iowa.

On February 12, 1945, she was united in marriage to Leo Joseph Burg in Stuart, Iowa. To this union nine children were born: Georgia, Charles, David, LaDonna, Diana, Michael, Gary, Debra and Joseph.

Ruth will be remembered for her amazing cooking, baking and her special bond with each and all her grandchildren. Her homemade cinnamon rolls and glazed doughnuts would have the neighbors “stop in” just to see if any were on the table. Ruth was a member of the St. Patrick’s Catholic Church in Massena, Iowa.

To order memorial trees or send flowers to the family in memory of Ruth Burg , please visit our flower store.
Send a Sympathy Card