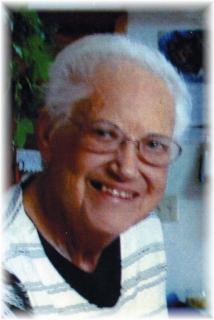 Celebration of Life Services: Friday, March 9, 2012, at 2:30 p.m. at the Emmanuel Lutheran Church in Fontanelle with burial in the Fontanelle Cemetery. Pastor Steven Broers will officiate the service.

Visitation: Thursday, March 8th from 2 to 8 p.m. at the Steen Funeral Home in Fontanelle with the family greeting friends from 6 to 8 p.m.

Memorials: To the Ruth Dwyer memorial fund to be established by the family.

Ruth Arlene Dwyer was born July 31, 1927, in Jackson Township, Adair County, Iowa, the daughter of Henry Paul and Pauline Elizabeth (Miller) Queck. She passed away on Tuesday, March 6, 2012, at the Iowa Methodist Medical Center in Des Moines, Iowa at the age of 84.

She was raised on a farm in Richland Township and attended Richland Consolidated School. On July 3, 1947, she was united in marriage to Dale Dwyer in the Emmanuel Lutheran Church in Fontanelle. Six children were born: Pauline, Michael, Annette, Dean, David and Janet. They lived on the Dwyer farm after Dale was discharged from the Navy. They bought the Hardware Store in Bridgewater in the fall of 1969 and later moved to that place.

Ruth enjoyed sewing and crocheting, was a member of the American Legion Auxiliary and was active with the women of the Emmanuel Lutheran Church.

She was preceded in death by her parents; husband, Dale in 2004; son, David Frank in infancy; brother, Glen Queck; and sister, Virginia Wallace.

To order memorial trees or send flowers to the family in memory of Ruth Dwyer , please visit our flower store.
Send a Sympathy Card