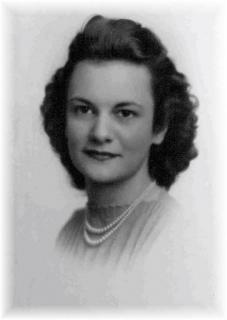 Funeral Services: Will be held on Friday, February 7, 2014, at 11:30 a.m. at the Steen Funeral Home in Massena with burial in the Victoria Township Cemetery, rural Massena. Father Ken Gross will officiate the service.

Family Visitation: Will be held on Friday at the Steen Funeral Home in Massena from 11:00 a.m. until service time.

Ruth May (Hogan) Wright was born May 10, 1920, the daughter of Thomas Francis Hogan and Lula Bagshaw Hogan, in Victoria Township, Cass County, Iowa. She passed away on Sunday, February 2, 2014 in Overland Park, Kansas at age 93.

Ruth was raised on her parents’ farm near Massena, Iowa. She graduated at age 16 from Massena High School in 1936, where she was President of her class. She then graduated from the University of Iowa in 1941, where she was a member of Alpha Delta Pi sorority, and served as President of her chapter. She also undertook masters-level studies in social work at The Ohio State University and at Saint Louis University.

Ruth was married January 10, 1943 in Alexandria, Louisiana to Walter Bartlett Wright, also a University of Iowa graduate, who was then serving in the Army Air Corps during World War II. They had three children. Following the war, they moved to Kansas City, Missouri where they owned Wright Brokerage Company, which they sold in 1959 so that Walt could further pursue an academic career. Ruth was a career homemaker, wife and mother. Ruth and her husband made Mission, Kansas their home in 1954, where she resided until soon before her death. Following Walt’s retirement as Dean of Continuing Education and Extension at UMKC in 1979, they divided their time between their homes in Mission, Kansas and Mesa, Arizona.

To order memorial trees or send flowers to the family in memory of Ruth Wright , please visit our flower store.