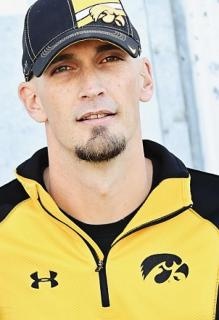 Funeral Services: Will be held on Saturday, October 21, 2017, at 1:00 p.m. at the United Methodist Church in Greenfield with burial at the Greenfield Cemetery. A luncheon will be held following the committal services at the church. Pastor Eric Schubert will officiate the service.

Open Visitation: Will be held on Friday, October 20th, at the Greenfield United Methodist Church from 2:00 p.m. to 8:00 p.m.

Family Visitation: The family will greet friends on Friday evening from 5:00 pm. to 8:00 p.m. at the Greenfield United Methodist Church.

Memorials: To the Ryan Danly memorial fund to be established by the family at a later date.

He was raised in Cedar Rapids and attended Jefferson High School and graduated in 2000. In his earlier years he played baseball with the Cedar Rapids Little Reds and Cedar Hill Booster Club. He went on to play for the minor leagues with the New York Mets in 2001 to 2006 and lived in Kingsport, TN, Columbia, SC, and Brooklyn, NY as a left handed pitcher. He had always dreamed about coaching kids in baseball and the past year he was helping coach the Nodaway Valley High School Baseball team. Another dream he had was to be a firefighter and fulfilled that dream by becoming a part of Greenfield Fire Department. He was employed at Cardinal IG in Greenfield, Iowa. On April 28, 2012, he was united in marriage to Stephanie (Jensen) Danly at the United Methodist Church in Greenfield, Iowa. To this union three daughters, Kennedy Jo, Brooklyn Ryan, and Arianna Grace were born.

His greatest joy was being a father to his daughters Kennedy, Brooklyn, and Arianna. He dearly loved spending time with them; they even called each other “Fart Buddies.” He loved fishing, camping, coaching baseball, being on the fire department, softball, traveling, and spending time with family and friends. He was a member of the United Methodist Church.

To order memorial trees or send flowers to the family in memory of Ryan Danly , please visit our flower store.