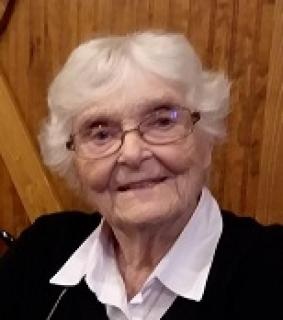 Funeral Services: Will be held on Tuesday, January 8, 2019, at 11:00 a.m. at the Orient United Methodist Church with burial in the Orient Cemetery. Pastor Cathy Nutting will officiate the. A luncheon will be held at the church following the committal services at the cemetery.

Open Visitation: Friends may call at the Steen Funeral Home in Greenfield on Monday, January 7th, from 2:00 p.m. to 7:00 p.m.

Family Visitation: The family will greet friends on Monday evening from 5:00 p.m. to 7:00 p.m. at the Steen Funeral Home in Greenfield.

Memorials: Memorials may be directed to the St. Jude’s Cancer Research.

Shirley Maxine Harry was born February 3, 1929, in Adams County, Iowa, the daughter of Claude and Georgia (Bennett) Antisdel. She passed away peacefully with her family on Friday, January 4, 2019, at hospice in Creston, Iowa, at the age of 89.

Shirley graduated from high school at Richland in 1946 and then attended teacher’s college prior to teaching at Williamson country school. Her teaching career was interrupted by her lifelong love Bill Harry. They were united in marriage in August of 1949. To this union five children were born: Rick, Dan, Chris, Deb, and Scott. Shirley and Bill had a good life together through the peaks and valleys of their journey. She especially enjoyed their annual trip to Arizona and the friends they made in the 30 years of being snowbirds. Her yard in Iowa was her pride and joy with flowers and more flowers.

To order memorial trees or send flowers to the family in memory of Shirley Harry , please visit our flower store.
Send a Sympathy Card