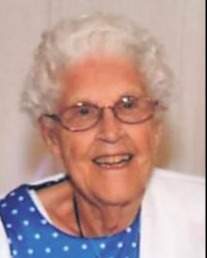 Funeral Services:  Will be held on Tuesday, August 23, 2022, at 11:00 a.m. at the Greenfield Gospel Chapel with burial in the Massena Center Cemetery. Mr. Phil Cannon will officiate the service.  A luncheon will be held at the church prior to the burial.  Online condolences may be left to the family at www.lambfuneralhomes.com.  The Lamb Funeral Home in Massena is in charge of the professional arrangements.

Memorials: To the Shirley Schwenke memorial fund to be established by the family at a later date.

Shirley Joan Schwenke was born on June 29, 1930, the daughter of Lewis and Dorothy (Denney) Kaufmann south of Anita, Iowa.  She passed away on Thursday, August 18, 2022, at the Greenfield Rehabilitation and Health Care Center in Greenfield, Iowa, at the age of 92.

Shirley lived south of Anita until 1944 when they moved to a farm north of Massena.  She graduated from Massena High School in 1948, attended summer school in Atlantic, taught in two rural schools in Massena Township for three years.

On May 29, 1949, she was united in marriage to Irvin Schwenke.  To this union three children were born: Janiece Ann, Gail Irvin and Roy Allan.  Shirley and Irvin farmed in the Massena and Cumberland area until 1982 when they sold out and went to Texas.  After three and a half years, they came back to Iowa.  They took care of Irvin’s mother and stepfather for twenty-five months.  After that they lived in Iowa during the summers and in Texas in the winter through 2003.  After her husband’s death, she moved to Oak Village in Greenfield, Iowa in 2004.

Shirley worked in the lunchroom for the Atlantic Community School for three years, then eighteen years doing income taxes.  She attended Berea, Lyman and the Greenfield Gospel Chapels.

She was preceded in death by her parents; husband, Irvin Schwenke in 2004; and her daughter, Janiece Ann in 2004.

She is survived by her two sons, Gail Schwenke and wife Janet Marie of Indianola and Roy Schwenke of Burns, Oregon; brother, Marian Kaufmann and wife Jerry of Atlantic; seven grandchildren; ten great grandchildren; other relatives and friends.

To order memorial trees or send flowers to the family in memory of Shirley Schwenke, 92, of Massena, please visit our flower store.

A luncheon will be held at the church immediately following the service with burial following in the Massena Center Cemetery.