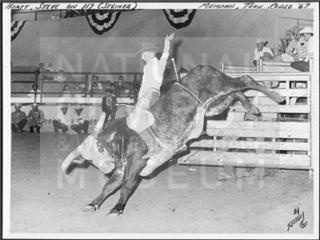 Steven Duane Hiatt of Massena, IA passed away on Saturday March 26, 2011 in Atlantic, IA. A Memorial Service will be held at Steen Funeral Home in Massena on Thursday, March 31st at 7 p.m.

Steve Duane Hiatt was born in Imperial NE, on September 25, 1949 to Arlen and Kathleen Hiatt. He was later joined by his sister Linda and the family moved to the Kearney NE area for several years. They then moved to Loup county Nebraska and he attended Taylor High School graduating in 1967. Steve’s passion was rodeo. He started his professional bull riding career at the tender age of 12 twelve years old and by his sixteenth birthday won the Nebraska State Rodeo Associations bull riding championship. Shortly thereafter, he joined the Professional Rodeo Cowboy Association and spent the next 15 years on the rodeo road competing in competitions nationwide. Throughout those years he won many events including the Cow Palace Rodeo, in San Francisco, CA, West of the Pecos Rodeo in Pecos, TX and holds the record for the high point ride at AK-SAR-BEN rodeo in Omaha, NE. He later sold real estate in Angel Fire, New Mexico and Austin, TX, worked as a grip on movie sets in Los Angeles, CA, and drove tractor trailers over the road. He loved music, horses, and children and spent his last years living in Massena, IA.

He is survived by his sister Linda Cade of Jones, OK and his mother Kathleen Hiatt of Columbus, NE. He was preceded in death by his father Arlen.

To order memorial trees or send flowers to the family in memory of Steven Hiatt , please visit our flower store.