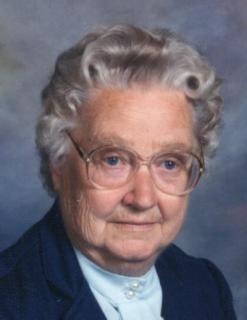 Open Visitation: Friends may call at the Steen Funeral Home in Greenfield on Friday, December 14th, from 2:00 p.m. to 7:00 p.m.

Family Visitation: The family will greet friends on Friday evening December 14th from 5:00 to 7:00 p.m. at the Steen Funeral Home in Greenfield.

Memorials: May be made to the Hebron United Methodist Church or to hospice.

Theresa Helen Tapken was born on August 2, 1919, in Gretna, Nebraska the daughter of Christopher and Amanda (Bauman) Wildhagen. She passed away on Wednesday, December 12, 2018, at the Greenfield Rehabilitation and Health Care Center in Greenfield, Iowa, at the age of 99.

Theresa grew up in Nebraska and graduated from Gretna High School. On March 5, 1940, she was united in marriage to George Tapken in Gretna, Nebraska. To this union four children were born: Arthur (Art), John, Helen and Grace. George and Theresa farmed in Nebraska for a few years and then moved to the Hebron area where they continued to farm. In 2014, Theresa moved into Greenfield. She loved her cattle, flowers, was a 4-H leader for Grand River Bluebirds, member of the Hebron United Methodist Church and Tuesday sewing club. Among her sewing, she enjoyed embroidery work for pillowcases and quilt tops. She also sewed numerous quilts for family and enjoyed crotcheting afghans.

To order memorial trees or send flowers to the family in memory of Theresa Tapken , please visit our flower store.
Send a Sympathy Card