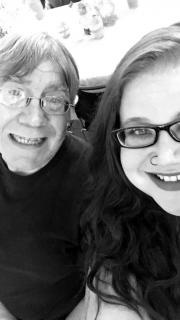 Celebration of Life Services: Will be held on Saturday, January 21, 2017, at 2:00 p.m. at the Hastings Funeral Home in Perry, Iowa with burial in the Violet Hill Cemetery in Perry at a later date. The Steen Funeral Home in Greenfield is in charge of the professional arrangements.

Luncheon:  There will be a luncheon immediately following the service at the funeral home.

Memorials: To the Thomas Matzie memorial fund to be established by the family at a later date.

Thomas James Matzie was born November 24, 1953, in Sewickley, Pennsylvania. He was the son of Anthony “Taw” and Sophia (Merkel) Matzie. Tom died January 13, 2017, at Mercy Medical Center in Des Moines. He was 63 years old.

Tom spent his early years in Ambridge, Pennsylvania, where he was baptized and confirmed at Holy Trinity Catholic Church.

In 1962 the family moved to Riverside, California, where Tom graduated from high school in 1971. He married and divorced Rose Ballard.

Tom worked in the security business in California and Pennsylvania before settling with family in Perry, Iowa, in 1979, and began working at Woodward State Hospital School where he was active in the AFSCME labor union. There he met and married Terri Queck. One daughter, Milini, his heart and soul, was born to this union. They moved to Greenfield in 1995 and later divorced.

He lived in Perry and Des Moines the remainder of his life, working a variety of jobs. He married and divorced Nancy Trotter.

Tom loved his daughter, Milini, and his extended family. He was an avid reader and music lover. He always enjoyed socializing with friends, talking politics and current events, and watching the Pittsburgh Steelers.

Tom was preceded in death by his parents, brother-in-law Melvin Whitfield, and niece Cassandra Whitfield.

He is survived by his daughter Milini Matzie of Ankeny, sister Prudence Whitfield of Perry, nieces Tammy Whitfield and Raina Whitfield (Joe Graham), both of Perry, great nieces Ashlee (Eric) Morman, Sadee Whitfield, Aubree Whitfield, and great-great nephew Huntter Morman, all of Perry; and his cousins, his brothers through life, Tim Zagar and Rudy Zagar of Perry, and Rob Zagar of Des Moines, as well as many other relatives and friends.

To order memorial trees or send flowers to the family in memory of Thomas Matzie , please visit our flower store.
Send a Sympathy Card