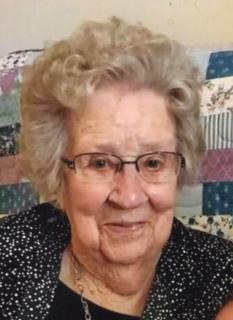 Graveside Services: Will be held on Saturday, November 23, 2019, at 11:00 a.m. at the Bryant Cemetery, Fontanelle, Iowa. A luncheon will follow the graveside service at the Fontanelle United Methodist Church. Pastor Steven Broers will officiate the service.

Memorials: To the Treva Taylor memorial fund to be established by the family at a later date.

Treva Eileen Taylor was born November 30, 1925 to Gifford and Grace (Hyde) Seley in Adair County, Iowa. She passed away on November 19, 2019, at the Good Samaritan Society in Fontanelle, Iowa, at the age of 93.

Treva grew up on a small farm five miles south of Fontanelle. As a child she worked alongside her father raising crops and tending to the livestock. She attended Richland School and loved to play basketball and by many accounts was considered to be a pretty good player.

After graduating high school, Treva ventured out on her own and moved to Omaha, Nebraska where she went to work for the phone company. While living in Omaha she met a young man named Keith Taylor whom she married a short time later. To this union two children were born: Roger Keith and Patricia Eileen. Keith and Treva were married 60 years before his passing in 2006.

Treva worked side by side with Keith on the farm. In 1961, they purchased the DX gas station followed by the Fontanelle Café. Both were sold in 1966 and they concentrated on the farm, trucking and other business endeavors.

Keith and Treva loved to travel all over the country in their Winnebago. Treva said many times if it hadn’t been for the motorhome they would not have been able to see as much of the country as they did. They ventured to Canada and Mexico many times. They loved to include their grandchildren Amy and Bob on many travel adventures.

In 1990, they retired from the farm and moved into a new home in Fontanelle. They truly loved being retired and continued traveling in the Winnebago.

Keith passed away in 2006 and Treva remained in the home until December of 2014 when she moved to the Good Samaritan Society in Fontanelle. She remained there until her death.

To order memorial trees or send flowers to the family in memory of Treva Taylor , please visit our flower store.