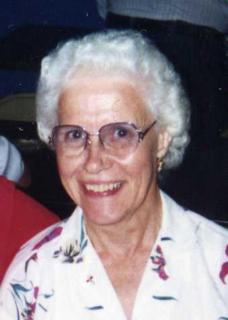 Funeral Services: Monday, January 17, 2011, at 1:00 p.m. at the Fontanelle United Methodist Church with burial in the Oakwood Cemetery, Casey, Iowa.

Velta Mary Young was born January 27, 1931 to Ernest L. Cline and Leah (Williams) Cline in their farm home near Casey, Iowa.  She passed away peacefully on Friday, January 14, 12011, at the Greenfield Manor in Greenfield, Iowa, at the age of 79 after a long struggle with Alzheimer's Disease.

On June 25, 1950 Velta married Manley B. Young at the Methodist Church in Casey. Through the years they lived in rural Casey, rural Anita and moved to Fontanelle in 1970 where Manley still resides. While a Farm wife, Velta sold Avon for many years and wrote local news for several weekly newspapers. Later she worked at Mertes Insurance in Adair, Farm Service and Adair County Mutual in Greenfield, and the Fontanelle Observer before retiring. She also kept books for Manley's trucking business.

Velta was active in her church and was Treasurer for the Fontanelle Methodist church for several years. She was a wonderful wife, mother and grandmother. She and Manley enjoyed spending time in south Texas during the winters and loved dancing. Velta never met a stranger.

To order memorial trees or send flowers to the family in memory of Velta Young , please visit our flower store.
Send a Sympathy Card