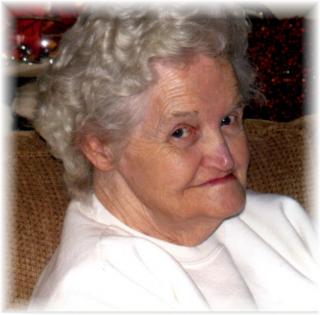 Services: Will be held at a later date.

Memorials: May be directed to the Veryl Schweers memorial fund to be established by the family.

Veryl Jean Schweers was born October 26, 1928, in Adair County, Iowa, the daughter of James Emmert and Irene Catherine (Dwyer) Foster. She passed away on Wednesday, December 19, 2012, at the Good Samaritan Society in Fontanelle, Iowa, at the age of 84.

Veryl was an attendant for the homecoming queen her senior year and was vice president of her graduating class of 1946. She attended beauty school in Des Moines and was a beautician prior to meeting Mert Schweers. On March 13, 1948, she was united in marriage to Herbert (Mert) Schweers in Greenfield, Iowa. To this union four children were born: Nancy, James, Jane and Sarah. She was a homemaker all of her married life

She was a member of the American Legion Auxiliary and the Presbyterian Church. She was a quiet lady and kept to herself. She enjoyed handwork and reading.

She was preceded in death by her parents; husband, Mert Schweers in 2006; son, James Schweers in 2012; and two brothers, Wayne and Erwin Foster.

To order memorial trees or send flowers to the family in memory of Veryl Schweers , please visit our flower store.
Send a Sympathy Card