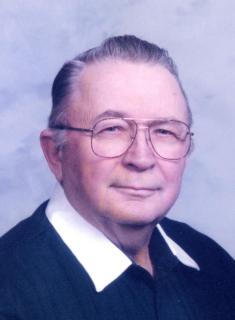 Family Visitation: The family will greet friends on Wednesday evening at the Steen Funeral Home in Massena from 6 to 8 p.m.

Memorials: To the Virgil Boos memorial fund to be established by the family at a later date.

Virgil Clarence Boos was born in Massena, Iowa, the son of Clarence and Elsa (Holste) Boos. He passed away on Saturday, October 13, 2018, at the Greenfield Rehabilitation and Health Care Center in Greenfield, Iowa, at the age of 93.

Virgil was raised and educated in the Massena area. He graduated from 8th grade in a country school which was also where he would meet his future wife, Grace Chapman. They were married in Shenandoah, Iowa, on March 31, 1947. To this union two children were born: Ron and Julia. The family would settle on a farm northeast of Cumberland. The couple also worked for the school system – Virgil driving the school bus and Grace cooking in the kitchen.

As Virgil was happiest when surrounded by family, he loved the annual summer trip to Minnesota. A tradition since 1959, what once just required one cabin to house their family, eventually grew to necessitate reserving the entire resort to house the whole family for a week of fishing and stories and precious time together at the lake. Aside from those yearly vacations, Virgil and Grace were content to stay close to home and their family, with the exception of their 40th anniversary. On that occasion, Ron and Julie decided to surprise their parents with a trip to see longtime friends Terry and Millie Harris in California.

He was preceded in death by his parents; wife, Grace Boos in 2015; sister, Lela Boos; and daughter-in-law, Michal Sue Boos.

To order memorial trees or send flowers to the family in memory of Virgil Boos , please visit our flower store.
Send a Sympathy Card