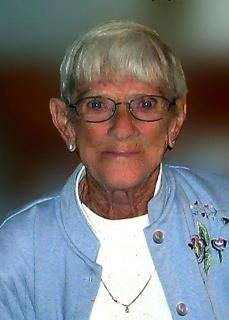 Virginia J. Rogers, daughter of Berenice (Heyn) and Elba Garside, was born July 6, 1923 in Cass County Iowa near Massena. She passed away on March 19, 2011 at the Healthcare Center of Merritt Island, Merritt Island, Florida at the age of 87.

Virginia graduated from Cumberland High School in 1941. After completing the Normal Training Course during high school, she taught country schools in the Massena area. On October 30, 1943, she and Robert Rogers were married at the Methodist Chapel in Bloomington, Indiana where Bob was stationed with the U. S. Army.

Virginia loved to cook and spent time in her kitchen daily. She also gardened and used the products to complete her cooking career. She also loved to spend time with family and found the holidays to be favorite times. She took great pride in her great-grandchildren and any time she could spend with them.

She was preceded in death by her parents, one brother, Dale Garside and son, Bruce Rogers.

A Celebration of Life Fellowship and Luncheon will be held on Saturday, April 9, 2011 at the Cumberland Community Center at 12 noon for friends and family.

The family requests memorials be made to the donor's favorite charities in lieu of flowers.

To order memorial trees or send flowers to the family in memory of Virginia Rogers , please visit our flower store.
Send a Sympathy Card