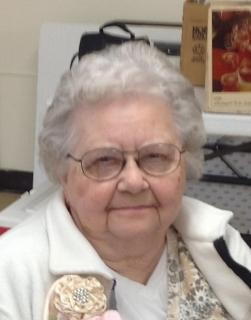 Memorials: To the Vivian Dahl memorial fund to be established by the family at a later date.

Vivian Marie (Miller) Dahl went to be with the Lord on Friday, December 25, 2015, at Greenfield Manor in Greenfield, Iowa. Vivian was born on July 14, 1922, in Plymouth, Iowa, to Steve and Mary (Chladek) Miller. She graduated from Plymouth High School in 1940. She was a graduate of La James College and Beauty School.

Vivian married Hubert Dahl in 1949. They farmed in the Manly area for several years before moving to St. Louis Missouri. During the time they lived in St. Louis, Hubert and Vivian both accepted Christ as their personal Lord and Saviour. They felt God’s leading to enter the ministry. In 1963, they moved their family to Ozark, Arkansas where Hubert and Vivian attended Ozark Bible Institute. They served as missionaries with North Arkansas Gospel Mission for several years. In 1968, they moved to Plymouth, Iowa to pastor Plymouth Community Church. In the 1980”s, they felt God calling them to minister at the Stanzel Christian School. Before Hubert’s passing, Hubert and Vivian ministered in the Stanzel and Menlo/Stuart communities.

She will be remembered for financially and prayerfully supporting many missionaries, her love of sewing and cooking for her family, her beautiful “whistling”, gardening and canning produce from her garden, and serving her family and loved ones. However, her greatest passion was sharing Jesus with those around her and praying for her family and friends!

To order memorial trees or send flowers to the family in memory of Vivian Dahl , please visit our flower store.