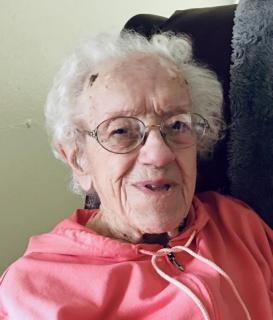 Vivian Madge Golly was born June 28, 1916, the daughter of Walter W. and Goldie Jane (Snider) Bissell in Zearing, Iowa. She passed away on Tuesday, October 6, 2020, at the Corning Specialty Care in Corning, Iowa, at the age of 104.

Vivian was raised in rural Zearing and graduated from Zearing High School in 1933. She was united in marriage to Earnest Lee Golly on July 2, 1935, in Zearing, Iowa. To this union three children were born: Joann, Robert and Lois.

Vivian worked for the Nebraska School for the Deaf in Omaha for many years and was a homemaker. She was an excellent seamstress, loved gardening, her flowers and attended church.

No services will be held.  The Steen Funeral Home in Fontanelle is in charge of the professional arrangements.

To order memorial trees or send flowers to the family in memory of Vivian Golly , please visit our flower store.