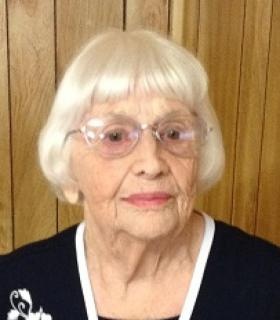 Family Visitation: The family will greet friends on Thursday evening, January 24th, from 5:00 p.m. to 7:00 p.m. at the Steen Funeral Home in Massena.

Scripture Service: Will be held on Thursday evening at 6:00 p.m. at the Steen Funeral Home in Massena.

Memorials: Memorials may be directed the the Vivian Langfelt memorial fund to be established by the family at a later date.

Vivian Agnes (Dougherty) Langfelt was born June 8, 1920, in rural Massena, Iowa. She was the daughter of Gratt M. and Loretta (Laura Waters) Dougherty. She passed away on Friday, January 18, 2019, at the Heritage House in Atlantic, Iowa.

Vivian grew up in rural Massena and attended Massena Center No. 5 grade school and graduated from Massena High School in 1938.  She was united in marriage to Charles Dale Langfelt on September 5, 1940. To this union four children were born: Charlotte, William, Robert and Coni.  Vivian was a lifelong resident of Massena and enjoyed being part of the community. She was a faithful member of St. Patrick’s Catholic Church and dedicated member of the Altar and Rosary Society, which were both a significant part of her life. She was a member of Massena Friends of the Library and the neighborhood Daisy Garden Club. Vivian was a longtime member of the Massena Legion Auxiliary Unit 963. She was very involved and spent countless hours serving veterans.  Vivian was self-employed and hung wallpaper in many of the homes in the Massena area. She was known for her quick technique and could get the job done in good time. She went to work for Dr. Dirlam as a nursing assistant between 1965 to the time of his retirement in 1975 and enjoyed taking care of many citizens of Massena. In retirement, Vivian and Dale made several trips to Florida to spend part of the winter. Vivian enjoyed playing cards downtown in the afternoons as well as at card parties. She enjoyed going with Dale and friends to Aksarben and would usually come home with a story. She was known in the community for her pies as well as her rhubarb jelly which was especially enjoyed by her grandchildren.

She was preceded in death by her parents; husband, Dale Langfelt in 1991; grandson, Randy Groves in 2011 and her four sisters: Verlee DeVore, Ella Mills, Charleen Sacco and Bernice Dougherty (in infancy) and two brothers, Donald and Denny Dougherty.

To order memorial trees or send flowers to the family in memory of Vivian Langfelt , please visit our flower store.