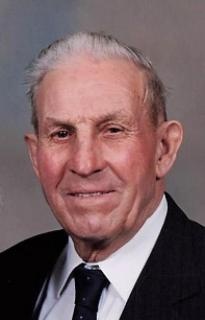 Private Immediate Family Funeral Services: Will be held on Monday, November 2, 2020, at 1:00 p.m. at the Emmanuel Lutheran Church in Fontanelle with burial in the Greenfield Cemetery. Full military graveside rites will be conducted by the Fontanelle American Legion Carlson Post No. 247. Pastor Steven Broers will officiate the service. The service will be livestreamed on the Emmanuel Lutheran Church Facebook Page.

Memorials: Memorials may be made to the Walter Herr memorial fund to be established by the family.

Walter Paul Herr was born on November 13, 1921 in rural Adair County, Iowa, to parents John Conrad Herr and Christina Ehm Herr. He grew up in Adair County on a farm northeast of Fontanelle and later on a farm southeast of Fontanelle with three brothers, William, Albert and Gilbert, and two sisters, Frieda and Irene. He was baptized December 18, 1921 and confirmed April 13, 1935 by Pastor William Kurtz at Emmanuel Lutheran Church in Fontanelle. Walter attended country school. He farmed with his dad and for neighboring farmers until entering the Army in August 1942.

Walter was assigned to the 176th infantry in Washington, D.C. serving as honorary guard for President Franklin D. Roosevelt. In 1943 he was transferred to combat training in Fort Benning, Georgia. In June 1944 he was shipped overseas to England and assigned to the Keystone Division known as the Bloody Bucket as a soldier of the 112th infantry. He landed in Omaha Beach in France in August 1944 traveling by truck and on foot through Luxembourg, Belgium and Germany joining the troops on the front line. Walter was wounded by sniper fire on August 23, 1944. He was taken first to a field hospital, then to Belgium, England and Scotland where he was put on the luxury liner “Eldie-France” to travel back to America. He landed in Boston on December 25, 1944 and traveled to William Beaumont Hospital in El Paso, Texas. Walter was hospitalized there for eight months being honorably discharged from the service in September 1945. His treasured souvenirs from service are his purple heart medal and the burp gun bullet.

On August 7, 1949, he married Marian Elizabeth Umbaugh at Emmanuel Lutheran Church in Fontanelle. Walter and Marian made their first home on a farm south of Fontanelle and later moved to a farm south of Greenfield. They became the parents of Barbara Sue, Paula Kay, Marcia Jane and Paul Walter. Walter was a lifetime farmer who loved to farm, later being joined by his son, Paul. He loved to garden, care for his orchard and support his children in church, school, sports and 4-H activities. His greatest passions were his faith, his family and his farms.

To order memorial trees or send flowers to the family in memory of Walter Herr , please visit our flower store.
Send a Sympathy Card