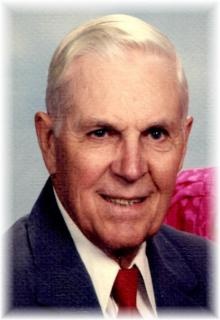 Funeral Services: Will be held on Friday, April 17, 2015, at 10:30 a.m. at the United Methodist Church in Greenfield with burial at the Oakwood Cemetery, Casey, Iowa. A luncheon will be held at the church following the committal services at the cemetery. Pastor Eric Schubert will officiate the service.

Family Visitation: The family will greet friends on Thursday evening from 6:00 to 8:00 p.m. at the Steen Funeral Home in Greenfield.

Memorials: Memorials may be made to the Greenfield United Methodist Church.

Walter H. Petersen was born January 27, 1916, the son of Nels Hans and Christina (Christensen) Petersen in rural Adair County, Iowa. He passed away on Saturday, April 11, 2015, at the Greenfield Rehabilitation and Health Care Center in Greenfield, Iowa, at the age of 99.

Walt farmed with his father until marrying Geraldine Guthrie on January 6, 1937. To this union one daughter was born: Carolyn. They purchased their farm ten miles north of Greenfield. They raised corn, oats, hogs, cattle and horses. They enjoyed riding in many area parades. They enjoyed trail rides with the local saddle club.

He was preceded in death by his parents; wife of 56 years, Geraldine Petersen; and brother, Roy Petersen.

To order memorial trees or send flowers to the family in memory of Walter Petersen , please visit our flower store.