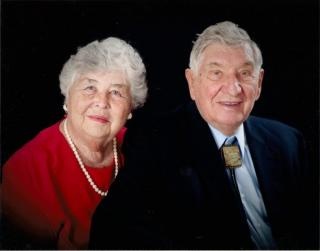 Graveside services honoring what would have been their 67th anniversary is planned for May 16, 2015 @ 11:00am at Massena Center Cemetery, north of Massena. Luncheon to follow at the United Methodist Church in Massena.

Warren has joined his beloved wife of 65 years, Ruth Allene (Hall) in heaven. They are survived by their four children: Randy (Pegie), Rodney (Cyndee), Rik (Tanya), Roma (Dave) Park, eleven grandchildren, and eight great grandchildren. They grew up in Cumberland and Massena, married, and then spent most of their working lives in Boulder, Colorado. Warren was an acknowledged craftsman and owned a specialty furniture restoration business for twenty years. He joined the staff at the University of Colorado and ran the furniture repair department until retirement. Allene completed her Education degree at the University of Colorado and spent her working years teaching elementary grades in Boulder. She was an exemplary teacher and instrumental with the Olympics of the Mind program. Both were active in the local Masonic organizations. Warren was past President of the Boulder Shrine Club and Allene was past Worthy Matron of Eastern Star. They enjoyed 25 great retirement years in Phoenix, AZ and were active at their church and community. They became ardent travelers, visiting over 28 countries and connecting with their family who had spread worldwide.

To order memorial trees or send flowers to the family in memory of Warren Roberts , please visit our flower store.
Send a Sympathy Card