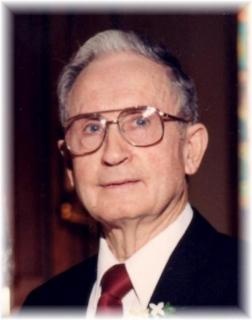 Wayne Abbott passed away on Friday, June 29, 2012, at the Sunrise Cottages in Rochester, Minnesota.

Funeral Services: Will be held on Thursday, July 5, 2012, at 1:00 p.m. at the Steen Funeral Home in Greenfield with burial in the Greenfield Cemetery with full military graveside rites by the Greenfield American Legion Head-Endres Post No. 265 and V.F.W. Post No. 5357.

Family Visitation: Will be held on Thursday one hour prior to services at the Steen Funeral Home in Greenfield.

Wayne Elmer Abbott was born April 5, 1922, in Union County, Iowa, the son of John Elmer and Sarah Agnes (Gray) Abbott. He passed away on Friday, June 29, 2012, at the Sunrise Cottages in Rochester, Minnesota, at the age of 90.

Wayne was raised in Greenfield and graduated from Greenfield High School in 1942. On April 5, 1942, he was united in marriage to Ruth LaVonne Bolger in Carmeron, Missouri. He served his country in the United States Army. He served in the Medical Corp during World War II in Australia, New Guinea and The Philippines from 1942 to 1945. After he was discharged from the military, they moved several times in the Midwest following Wayne’s work as an engineer. In 1970, the couple moved to Frederic, Wisconsin, where they lived for 20 years. In 1990, they moved to New Hampton, Iowa. In 2010, Wayne moved to Rochester, Minnesota.

Wayne enjoyed woodworking, gardening, riding his bicycle and taking walks. He especially loved being with his family.

He is survived by his daughter, Jayne Yamriska and husband Tim of DeForest, Wisconsin; son, Jerry Abbott and wife Denise of Rochester, MN; granddaughter, Jenna Abbott; several nieces, nephews, other relatives and friends.

To order memorial trees or send flowers to the family in memory of Wayne Abbott , please visit our flower store.