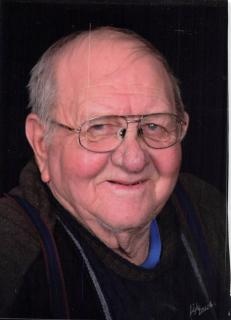 Public Graveside Services: Will be held on Saturday, November 14, 2020, at 2:00 p.m. at the Fontanelle Cemetery with full military graveside rites conducted by the Fontanelle American Legion Carlson Post No. 247. Pastor Steven Broers will officiate the service.

Due to state and federal guidance on gatherings due to the COVID-19 pandemic, the family, church and funeral home requests masks to be worn and social distancing to be practiced.

Memorials: Memorials may be directed to the Wayne “Tobe” Held Memorial Fund to be established by the family at a later date.

Wayne “Tobe” Aldon Held was born May 16, 1933 in rural Adair County, Iowa. He was the son of Erwin Marx and Ella Elsie (Neumann) Held. He passed away at the Good Samaritan Center in Fontanelle, Iowa on Monday, November 9, 2020 at the age of 87 years old.

Tobe grew up in Fontanelle, Iowa where he attended school and graduated. He served in the United States Army and fought in the Korean War from 1954-1955. After his military service, he did some work farming and for Schildberg’s, but he spent more than 40 years of his life as a crane operator with A.M. Cohron & Son Inc. (Atlantic) and Murphy Heavy Contracting (Anita). When he was not working, Tobe was a regular at the Greenfield Bowling Alley where he had countless friends to talk to and enjoy a cold one with. He could also be found cruising the roads of Adair County in one of his fun vehicles. Hopefully you weren’t in a hurry if you ever got behind him though. You could always pick Toby out of a crowd with his many decorated trucker caps. Tobe was a 20+ year member of the Fontanelle Legion Post #247 as well as a lifelong member of the Emmanuel Lutheran Church in Fontanelle where he could be found almost every Sunday.

Tobe is preceded in death by his parents, Erwin and Ella; his sister-in-law, Jane Held; and his son-in-law; Ed Carl.

He is survived by his brother, Gene Held, his children, Bobbi Held, Jeff Held and Mindee Thompson (Terry); his stepchildren, Dean Turner, Doug Turner and Kim Kamiura (Tom); his grandchildren, Whitney Sidey (Kirk), Weston Held and Rachel Stender (Jacob); and his great grandchildren; Kaison, Knox, Alexis and Jackson as well as many other friends and loved ones.

Tobe’s family wishes to express their gratitude for all acts of kindness shown to them in their time of sorrow.

To order memorial trees or send flowers to the family in memory of Wayne Held , please visit our flower store.