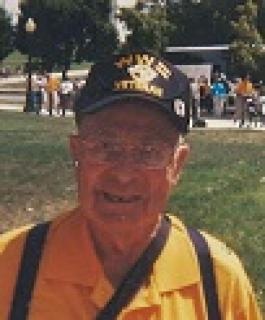 Public Graveside Services: Will be held at the Garner Cemetery south of Bridgewater on Saturday, September 5, 2020, at 1:00 p.m. with full military graveside rites conducted by the Greenfield American Legion Head-Endres Post No. 265 and V.F.W. Post No. 5357. The cemetery is located 2 miles south of Bridgewater on County Road N51, Adair County, Iowa. Due to COVID-19, Social Distancing will be practiced and the family encourages you to bring a lawn chair to the graveside service. The Steen Funeral Home in Greenfield is in charge of the professional arrangements.

Memorials: May be directed to the Community Care Center in Stuart, Iowa.

But thanks be to God who gives us the victory through our Lord Jesus Christ. 1Cor. 15:57

Wayne Royce Walter at the age of 99 passed away August 28, 2020 at the Stuart Community Care Center in Stuart, Iowa.

Wayne was called to duty and served in World War II from 1942 - 1945. He was scheduled to train with the glider squadron at Camp McCall in Southern Pines, NC. Soon after arriving, Wayne transferred from the glider squadron to paratrooper, hopeful it was safer to deploy from an airplane than a glider; it was later revealed that a properly working chute was the safest of equipment.

Wayne along with several men were on a late-night training mission, parachuting thousands of feet from the air. During this jump, Wayne and other’s chutes malfunctioned. Wayne was approximately 100 feet from the ground when he managed to pull his safety reserve, which did not offer much resistance when his body hit the ground. Fearing the worse, he found his only injuries were the equipment he kept in his pockets!

After training, Private Walter of the 13 Airborne and 194 Glider Infantry was sent to France on the Liberty Ship where he was blessed to never parachute on enemy territory, to which he attributes to General Patton for ending the war with a victory.

Wayne and his bride farmed near Brooks, Iowa, before moving to Casey Iowa in 1956 to start an electric/plumbing business. In 1966 the family moved to Jefferson Iowa where he worked for Rural Electric Company (REC). Wayne then advanced his career with Iowa Electric, where he served as an appliance repairman and retired at age 62. After retirement he and Opal moved to and managed the Senior Citizen home in Jefferson next to the golf course, where Wayne loved to golf with his buddies. In 2002 the couple moved to Stuart Iowa.

Wayne was preceded in death by his parents, his wife and two siblings, MaryLou Schircliff of San Deimas, CA and Jean Carlson of Red Oak, IA.

To order memorial trees or send flowers to the family in memory of Wayne Walter , please visit our flower store.