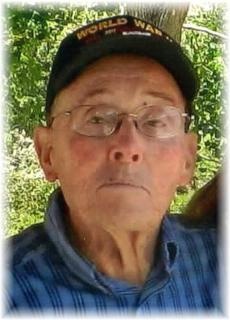 Wilburn Morris passed away on Tuesday, April 28, 2015, at his granddaughter’s home in Greenfield.

Wilburn Zack Morris was born on May 15, 1922 in Four Mile, KY. He was the son of Eva Mae Ellis and Elijah Frank Morris. He passed away on April 28, 2015 at his granddaughter’s home in Greenfield, IA.

Morris, as he was often called, was raised and educated in Kentucky. He was stationed in Ft. Logan Colorado. He met and married Ann Kunkley on March 6, 1943 before he left for the service. To this union three children were born: James, Robert, and Donald.

Wilburn was a WWII veteran that served his county from 1941-1945. After the war, he was an instrument maker for the government. He retired in 1980. He enjoyed woodworking, family, VFW and the Legion.

He was proceeded in death by his wife, parents, three sisters, 3 brothers and son, Bob.

To order memorial trees or send flowers to the family in memory of Wilburn Morris , please visit our flower store.