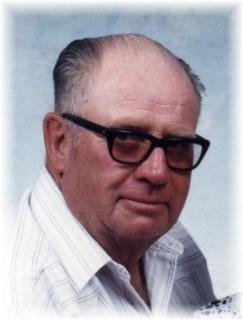 Funeral Services: Will be held on Tuesday, September 11, 2012, at the Steen Funeral Home in Fontanelle at 10:30 a.m. Burial will be in the Fontanelle Cemetery with full military graveside rites will be conducted by the Fontanelle American Legion Carlson Post No. 247. A luncheon will be held at the Fontanelle United Methodist Church following the burial.

Visitation: Will be held on Monday at the Steen Funeral Home in Fontanelle from 3:00 p.m. to 8:00 p.m. with the family greeting friends from 6 to 8 p.m.

Memorials: To the Bill Westphal memorial fund to be established by the family.

William Herman "Bill" Westphal, son of Lafe and Emma (Diers) Westphal was born June 22, 1925, on the family farm north of Fontanelle, Iowa. He passed away on Friday, September 7, 2012, at the Greenfield Manor in Greenfield, Iowa.

Bill was baptized at and became a member of the Highland United Methodist Church. He received his formal education at Eureka #6 country school and Fontanelle High School, graduating in 1943. Following high school, Bill entered the United States Army, serving his country in Italy. On March 13, 1947, he was honorably discharged from military service. Returning to Iowa, Bill farmed and especially liked working with his cattle. On October 1, 1956, he was united in marriage to Betty Stuva Campbell. Betty's two children, Steve and Deanna Campbell, also joined this household. A niece and nephew, Steve and Cindy Westphal, later made their home with Bill and Betty for several years.

Although retired, Bill remained on the family farm until 2001 when he moved to Greenfield. He entered the Greenfield Manor in 2010. He was a sixty-plus-year member of the Fontanelle American Legion Carlson Post No. 247 and a long-time member of Farm Bureau.

To order memorial trees or send flowers to the family in memory of William Westphal , please visit our flower store.
Send a Sympathy Card