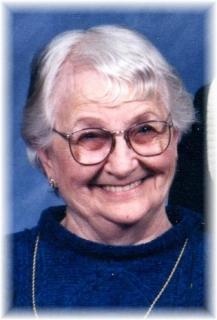 Funeral Services: Thursday, January 5, 2012, at 10:30 a.m. at the Steen Funeral Home in Fontanelle with burial in the Fontanelle Cemetery. A luncheon will follow the burial at the Fontanelle United Methodist Church.

Memorials: To the Good Samaritan Society in Fontanelle.

Wilma Irene Dunkerson was born May 16, 1919, to August Joe and Alma (Bruhn) Fust on the family farm northeast of Fontanelle, Iowa. She passed away on Sunday, January 1, 2012, at the Good Samaritan Society in Fontanelle, Iowa, at the age of 92.

Wilma grew up and attended country school north of Fontanelle. She lived her entire life in the Fontanelle area. On October 12, 1935, she was united in marriage to Clarence Dunkerson in Fontanelle, Iowa. To this union three children were born: Jack, Janet, and Dennis. Clarence passed away in 1970.

In 1973, she was united in marriage with her second husband, Glen Dunn. Glen passed away in 1993. She kept books for Glen's gas station, did babysitting for numerous families in the Fontanelle area, and was a bookkeeper for Cummins Construction. She loved to make Christmas cookies and candy for family and friends, enjoyed quilting, embroidering, putting together puzzles, word puzzles and was an avid sports fan.

To order memorial trees or send flowers to the family in memory of Wilma Dunkerson , please visit our flower store.
Send a Sympathy Card