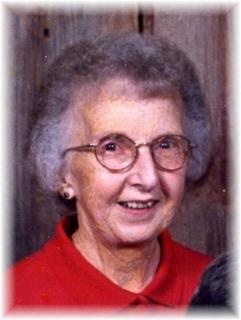 Open Visitation: Will be held on Friday, February 6th from 12 p.m. to 7 p.m. at the Steen Funeral Home in Massena.

Family Visitation: The family will greet friends on Friday evening from 5 to 7 p.m. at the Steen Funeral Home in Massena.

Rosary: A Rosary will be recited at the Steen Funeral Home in Massena on Friday, February 6th at 4:00 p.m.

Memorials: Memorials may be made to the Wilma McCurdy memorial fund to be established by the family at a later date.

Wilma Irene McCurdy was born June 2, 1926, to George and Mabel (Slezak) Palma in Williamson, Iowa. She passed away on Tuesday, February 3, 2015, at the Cass County Memorial Hospital in Atlantic, Iowa, at the age of 88.

Wilma attended country school at Williamson and graduated from Richland High School in 1943. After graduation she attended Commercial Extension Business School in Omaha, graduating in May of 1944. She worked for Melady Brothers Livestock Commission Firm at the stockyards until she married Calvin McCurdy on April 22, 1950. They lived on a farm south of Cumberland for nine years. In 1959, they bought the farm southeast of Massena where they reside today. Wilma was a lifelong member of the Williamson American Legion Auxiliary Post No. 719, where she had served as president for six years. She enjoyed gardening, both flowers and vegetables. Wilma loved spending time with all of her grandchildren and great-grandchildren.

She was preceded in death by her parents; brother, Howard and wife Freddie; grandson, Dustin McCurdy.

The family of Wilma McCurdy wishes to express their gratitude for all acts of kindness shown to them in their time of sorrow and invites you to join them for a luncheon at the parish hall following the services at the cemetery.

To order memorial trees or send flowers to the family in memory of Wilma McCurdy , please visit our flower store.
Send a Sympathy Card