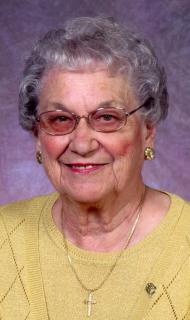 Funeral Services: Will be held on Tuesday, September 24, 2013, at 10:30 a.m. at the Immanuel Lutheran Church in Greenfield with burial in the Greenfield Cemetery. A luncheon will be held following services at the cemetery. The Rev. Dr. Keith Schweitzer will officiate the service.

Visitation: Will be held on Monday, September 23rd at the Steen Funeral Home in Greenfield from 12 to 8 p.m. with the family greeting friends from 6 to 8 p.m.

Wilma Luella Ada Weber was born July 24, 1921, the daughter of John and Matilda (Leuthauser) Weinheimer in Adair County, Iowa. She passed away on Friday, September 20, 2013, at the Greenfield Manor in Greenfield, Iowa, at the age of 92.

Wilma grew up in Adair County, attending grade school in the country and graduated from Greenfield High School in 1939. Wilma taught several different rural one room schools in Lee and Grove Townships. On April 14, 1946, she was united in marriage to Orville Weber in the Emmanuel Lutheran Church in Fontanelle, Iowa. To this union two sons were born: Curtis and David.

Wilma worked for The Golden Rule Department Store in Greenfield as a clerk for many years. She enjoyed sewing, cooking, canning, especially freezing hundreds of pints of sweet corn and gardening. She was a member of the Immanuel Lutheran Church, taught Sunday school, sang in the choir, was a faithful member of the ladies aide and volunteered to do any and all functions at the church. Wilma's life was made up of non-stop working at one thing or another. She did really enjoy the nearly 20 years of going to Yuma, Arizona, with Orville, during the winter months. Also, her enjoyment was being in a card club with Orville and five other couples, who were the best of friends for many decades. Wilma was the last of the group to leave us.

She was preceded in death by her parents; husband, Orville in 2002; brother, Edward Weinheimer; sister, Florence Hohertz, infant sister, Minnie; and several brothers and sisters-in-law.

To order memorial trees or send flowers to the family in memory of Wilma Weber , please visit our flower store.